If you're a believer in the power of logic, may as well skip the game tomorrow. Two math professors at the University of London have supposedly determined who will win the World Cup, and have displayed their findings as a sophisticated infographic: 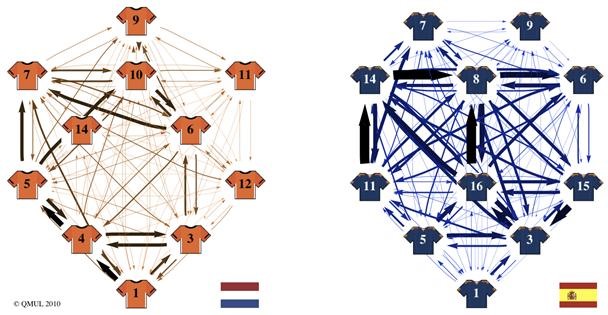 The short and simple explanation? Spain will win because they pass 40% more than The Netherlands, resulting in a better "network" for domination, exploiting their opponent's weaknesses.

"For each national side, Drs López Peña and Touchette have drawn up a 'network' of passes between players throughout the tournament and analysed how these networks compare between teams. Dr Touchette explains: 'Each player in the network is given a score called centrality which measures how vital they are to the network. The higher the centrality score, the bigger the impact if that player wasn't there. This method is most commonly used to make computer networks more robust, but it can also be used to plan football strategy.'

Graph Theory is used to analyse different types of network, most commonly to investigate computer networks - such as the internet - and to model what would happen if different parts of the networks were suddenly removed. This type of research, which takes place in Queen Mary's School of Mathematical Sciences, can make computer networks more robust and less susceptible to disruption."

I don't know about you, but this prediction seems a bit more solid than Paul, the psychic octopus...

Get caught up in the World Cup spirit. Only one day left!

Wow, this should be a regular statistic.