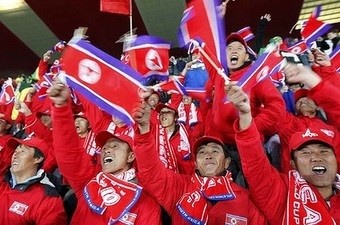 Fair and valid question. It's seeming IMPOSSIBLE for any North Korean citizen to get a visa to leave the communist regime (not that they could afford it, anyway) to attend this past week's game. After much initial speculation on whether these fans were the real deal, the mystery has been resolved by multiple news sources.

This is London reports:

"Perhaps it was their identical red outfits or how their applause was directed by a 'conductor' that suggested the North Koreans in the Ellis Park stadium in South Africa were no ordinary fans. 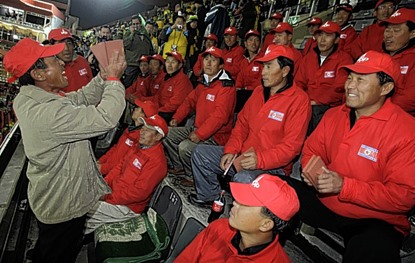 But today, the truth behind the 'supporters' emerged when it was revealed that one group of North Koreans - none of whom knew each other in advance - had been hand-picked by Kim Jong-il's government, while another party were actually Chinese, 'volunteered' to back their Communist cousins.

Fifa officials and millions of television viewers were surprised when rows of red-clad 'North Koreans' took their seats, believing the harsh regime had allowed its citizens freedom to travel. 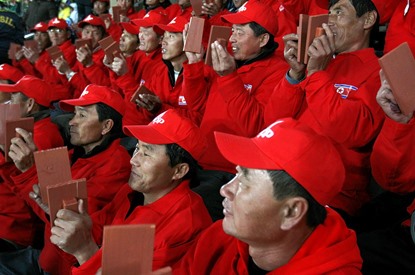 But one fan, Kim Yong Chon, 43, who said he was North Korean, told reporters his group of 300 had been carefully chosen by the North Korean government.

Meanwhile, another party of fans confirmed rumours they were Chinese, having obtained tickets through a Chinese sports PR agency, authorised to sell part of the North Korean allocation of 1,400 seats.

One Brazilian fan said: 'I spoke with them. They had come from Beijing and knew nothing about football or the World Cup. They said they were supporting their Communist cousins and were happy to be there...'" (Read more) 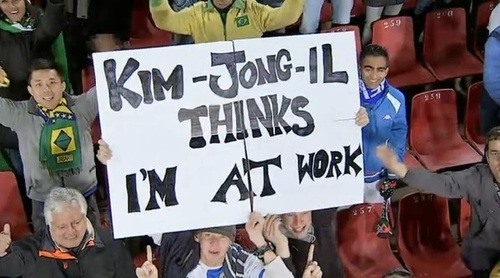 Oh Kim Jong Il, you are the silliest world leader in existence.